Rhino 7 Franchise Development Corporation is in the business of identifying and developing strong, sustainable business models and turning them into successful franchises. Only one in about 100 concepts brought to Rhino 7 is ultimately fleshed out by the company and turned into a franchising opportunity for the concept owner. Years of experience in the franchise sales world has made Rhino 7 owners Doug Schadle and John Cohen savvy and selective about which franchise opportunities are likely to gain traction, and which are not.

Storm Guard, the insurance restoration franchise developed under the Rhino 7 umbrella this year, marks a turning point in franchise consulting for Cohen and Schadle. For the first time, the partners are putting their faith to the ultimate test in a new brand and business model : they have invested in Storm Guard as franchisees.

Cohen said, “The Storm Guard business model and opportunity really grabbed Doug and me, for three reasons. One is the profitability. Two, the favorable competitive conditions in our area. There’s very little organized competition in the insurance restoration space, and none that is franchised.”

“Third and definitely not least, there’s the credibility and the endorsement that our buy-in gives to Storm Guard, which is one of Rhino 7’s premier franchise opportunities. For the first time, I can say to a prospective franchise buyer, ‘Look, not only am I a franchise developer, I’m also a zee [industry jargon for franchisee].'” 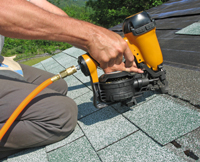 Cohen and Schadle created a company separate from Rhino 7, called R7 Restoration, for the purpose of owning and operating their Storm Guard franchise.  Operating in the Cary/Apex region of North Carolina, the new Storm Guard company has already completed three roofing jobs, with at least ten more in the pipeline, in less than one month of doing business.

“We persuaded Storm Guard to add operational support and system efficiencies that will help the brand’s franchise sales in the future. Owning a franchise that we’ve helped develop has allowed us to see and solve problems with an appreciation of both sides of the equation – the franchisor’s and franchisee’s.”